A Gift of Shalom 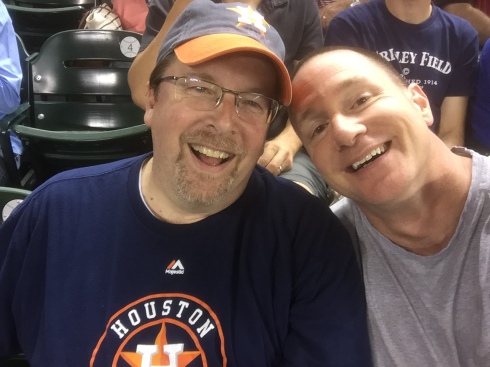 Craig and I sharing an Astro’s game together – they lost…

It was just a little past noon when I pulled up in front of their home. Graciously, Craig and Trisha were going to allow me to mooch off of them for no less than NINE days. Nine days of sitting in the dinning area at meal times. Nine days of sprawling out on the living room sofa. Nine days shuffling the order of cars in the driveway, showers, coffee, meals, conversation and life. Nine days of letting someone you don’t really know that well, and have never lived with before, move in and live with you.

But they did much more than LET. And while I was technically a guest in their home, I was never really a guest. It was more than that. It was richer, and deeper. It was shared fellowship that blessed me greatly.
I was going to be in Texas for nearly two weeks. Away from family soon after dropping my oldest off at Hope College. Most of that time would be spent getting training in some marriage therapy before participating in a Faithwalking Retreat with other pastors from the RCA and CRC. Rather than spend those first nine days in a hotel, I did what I do – I invited myself over to the to someone’s house! In this case, the home of Craig and Trisha Taylor.

I know Trisha well through Ridder Church Renewal (an RCA/CRC initiative) and had met Craig once. As soon as I stepped into the house, I was not only given a key and full access to the kitchen, where I taught them how to make double crust stuffed pizza, but I was also given the gift of shalom.

It was shalom in the sense that while I was away from my family, I was given much more than “guest privileges.” At no time did I sense I was tolerated, but was made to feel that my presence in their home mattered.

What was on my heart, mattered to them. And as they would share, it was done in such a way that what was on their hearts mattered to me. I had access to who they were and they had access to who I am. When Craig and I were told we were on our own for dinner, we spent hours sitting at the table sharing long after the pulled-pork sandwiches, and although my backside was sore from sitting, the experience of shalom kept us glued to where we were. Shalom.

Throughout the following days we would laugh, watch sports, talk music and movies, go to the coast and eat out; but there was always more. There was a shared sense of meaning and the work of God in our lives.
The gift of hospitality is much more than a bed or some food. The gift of hospitality creates space where lives intersect, can be accessed by others and shared in such a way that shalom develops.

Depending on the version you read, the Bible calls this “entertaining” one another (Hebrews 13). But our culture today has hijacked that to mean something trivial – having a “good time.” Not that having a good time is bad, I’m all about that! But to be hospitable, entertaining one another, is so much more. In Romans 12:10 we are told to be devoted to one another, prefer one another; and, when the occasion arises, entertain one another.

I wonder what it would look like if the CHURCH were more entertaining. Not with light, music, programs and parking lot greeters; but in the deeper sense of the word. What if the church was about the business of creating the safe places necessary for others to experience the Shalom of God?

This entry was posted on Wednesday, September 23rd, 2015 at 6:41 pm and tagged with discipleship, entertain, faith, Fellowship, gift, home, hospitality, hosting, Jesus, Leadership, life, love, relationships, shalom and posted in Uncategorized. You can follow any responses to this entry through the RSS 2.0 feed.
« Awkward…!
Dr. Dobson – I love you, but I think you got it wrong. »