Overheard At The PGA 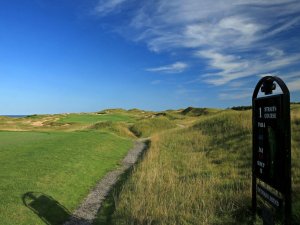 We were all set to enjoy a beautiful day of incredible golf.  We both woke up earlier than expected and so Brad and I made our way to stands at the 1st tee of the 2015 PGA Championship at Whistling Straits in WI.  Sitting on the top row of the stands we drank coffee and people watched while waiting for the round to start.

Neither of us paid much attention to the three gentlemen who made their way up next to us where they stood on the bench leaning against the back railing.  And then their conversation caught my attention…

They had spotted to young ladies wearing matching dresses.

It was clear, when I looked, that they were high school aged girls with their parents, who were also wearing clothes that matched.  The whole family was clothing coordinated for the day!

The conversation next to us was really more of a monologue with appreciative male noises of agreement.  As word for word as I can remember, it went like this:  Look, those two girls are wearing the same dress. (grunts)  I wonder if they always dress the same… (grunts) I wonder if even their underwear matches… If they’re even wearing any. (more grunts) And down the bleachers they went.

When I looked, the speaker was a man about the age of 50 – gray hair and all – with his two sons.

And it got me wondering.

I wondered how often in their lives women feel like they aren’t seen as persons but as bodies.  I wondered how often they know they are seen as bright, intelligent, creative women and not just for the clothes they wear or their body parts.  I began to wonder about all of the ladies there at the PGA on Sunday and how often during the day they felt uncomfortable because a stranger in the crowd decided to check them out.

I also began to wonder about the dad and his sons.  I wondered if scoping out young girls was really life giving to him.  I wondered if he knew he was created for more than that.  I wondered if his sons were embarrassed by his words and what they were learning about how to be a man.

We are all gendered beings. God created us this way – as male and female.  But we are so much more than just the sum of our genital parts.

I guess I shouldn’t have been surprised at the conversation we overheard.  And, out of the tens of thousands of people at the PGA Championship, it probably wasn’t an isolated incident.  Somewhere along the way this dad, and so many of us like him, was taught a way of being, and got stuck.  Stuck in a way of seeing himself and others.

And we will need to do this in the midst of the overwhelming sexualization of the world around us.

This entry was posted on Tuesday, August 18th, 2015 at 10:44 am and tagged with culture, female, femalehood, gender, gender issues, lust, male, manhood, oversexualization, PGA, PGA Championship, sex, sexism and posted in Uncategorized. You can follow any responses to this entry through the RSS 2.0 feed.
« Learning Leadership From Horses…?
My Prayers Grew With Him »