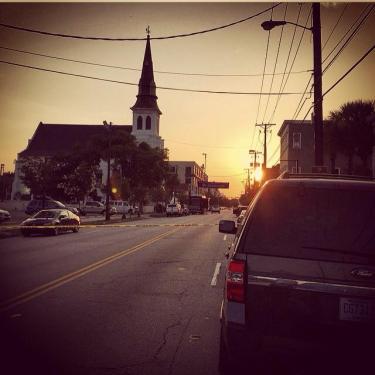 I got this photo from a friend of mine who lives in Charleston, S.C. It was taken the morning of June 18 – the morning after the shooting

Yesterday morning I woke up and went through my usual routine.  When I got to perusing the news, my heart sank.  There was a ball in my stomach and I felt sick. Wednesday night there was a mass murder of 9 individuals attending a Bible Study at Emanuel African Methodist Episcopal Church in Charleston, S.C.  And while we don’t have all of the details yet, it seems this was a hate crime born out of racism.

Throughout the course of the day yesterday I was part of, and an observer of, several conversations about the shooting in Charleston.  Most of the conversations were with white church going believers.  Many of them hold significant leadership positions of various kinds.  These are good people whom I love and admire!  But there was a theme – no, a story, being told throughout the conversations that was very troubling to me.  The story being told can be summed up in one sentence:

It isn’t really a racism problem, it is a sin problem. Can we call that what it is?  Please?

Yes, racism and hate is a sin.  Scripture records for us the first hate crime in Genesis 4 with Cain and Abel.  Romans 3:23 reinforces for us that when sin entered into the world that ALL OF US have sin, “for all have sinned and fallen short of the glory of God.”  Racism is sin.  Hatred is sin.

Passing off a racially motivated murder of 9 individuals, or even 1 individual, as a sin problem is a story we tell ourselves so we can assume the role of helpless victims.  Not victims to racism.  Not victims to hatred.  But we play the roles of victims to sin.

This is where we helplessly throw our hands up in the air saying “it’s a sin issue” as if there is nothing we can do about it.  When we gloss over egregious evil in our world by labeling it a sin issue, we allow ourselves to become helpless and habitually disobedient to the teachings of Jesus.

Let me say that all differently.  We do life as if we are obligated to live with racism in our world because there is sin in the world.  If we obligate ourselves to living with racism, with sin, then we enslave ourselves to racism, its existence, and let it control us as we play the helpless victim.

We partner with the work of the Spirit in this renewal process.  It is hard work.  it is the working out of our salvation.

Racism is sin.  Sin is a problem.  But racism is not just a sin problem we can’t do something about.  We can learn to boldly love.  We can proactively develop relationships with others who are different than ourselves.  We can stop teaching our children to hate or to be passive.  We can stand up to injustice, even in its smallest forms, when it creeps into our communities, neighborhoods, and even our churches.

This entry was posted on Friday, June 19th, 2015 at 10:30 am and tagged with bold love, Charleston, Charleston shooting, Emanuel African Methodist Church, habitual sin, hate crimes, injustice, Jesus, Leadership, love, Racism, sin, transformation and posted in Uncategorized. You can follow any responses to this entry through the RSS 2.0 feed.
« Really?!?
We’re Asking The Wrong Questions »