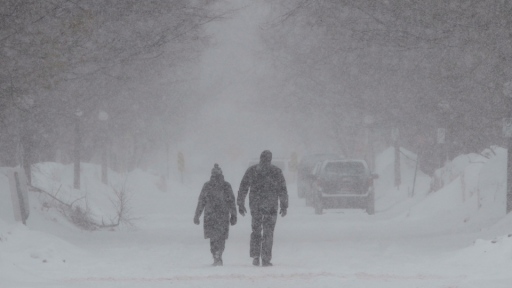 The call came early.  Really early.  5 something.  The robocall was telling us there would be no school today.  Weather.  Weather in Kalamazoo, Michigan.  As I rolled over to try and go back to sleep the thought in my mind was, “don’t plan any June vacations!”  We get a lot of snow in Southwest Michigan and I love it!  I like the snow.

At 6:00am I determine sleep isn’t returning so I get up, blow one side of the driveway and then head off to the gym for an early workout.  With close to 8″ of snow on the road I am enjoying how my Subaru Legacy handles in the snow!  It’s dark and so I am pretty close to them when I spot two people walking in the middle of the road.

Why don’t they walk on the sidewalk!?  As I look over to the side I realize the sidewalk is hidden beneath the snow that is falling and being blown around.  Looking ahead again I slow down to drive around the people walking in the road.  It is a man and a woman.  They aren’t wearing hats or gloves and are carrying plastic bags with what looks like groceries. The man has a binder in his left hand.

He is slightly in front of her as I drive up alongside them.  I put the passenger side window down.  “Would you like a ride?” I ask.  He looks at her, she looks at him, he looks at me.  Looking in the car he asks with a bit of skepticism, “are you sure?”

“Yeah, get in,” I respond.  He gets in front and she climbs into the back.  My legacy isn’t a big car and he is a big guy and they both have bags of food with them.  It didn’t matter if we were clogging up North Westnedge Avenue, the only people driving around in this weather are goofy folks like me.  We start heading south again.

“Where are you headed?”

“The McDonalds.” He says it like a question, wondering if I am willing to take them that far.

“No problem,” I say and we are creating tracks through the snow.

We chat a bit about the snow.  We remark about how early it feels for this kind of weather to be upon us already.  He shares that they have a car but it isn’t working  yet.  He’s confident he will get it running – in the next couple of weeks – maybe.  They’re both rubbing their hands together to warm them up.

There’s no traffic so it doesn’t take us long to arrive at McDonalds.  I pull into the parking lot and stop.  He looks at me and is sincerely grateful as he thanks me for the ride.  Then he stops for a moment and says, “Well this was really unusual!”

“Well, there aren’t a lot of white people giving rides to black people,” he states. “Especially at 6:30 in the morning!”

“You’re black!?” I exclaim with mock surprise. He laughs. She laughs. We say goodbye.

Today we anticipate the grand jury in Ferguson will announce their ruling on whether to indict police officer Darren Wilson for the shooting of Brown, an unarmed black man and the city is poised for violence.

I can’t help but believe that we can live differently.

This entry was posted on Tuesday, November 18th, 2014 at 11:53 am and tagged with action, discipleship, ferguson, gospel life, Jesus, Leadership, life, love, loving others, Matthew 25, neighbor, Racism, Risk, snow and posted in Uncategorized. You can follow any responses to this entry through the RSS 2.0 feed.
« when integrity is GRITY
Sarah Young Isn’t Satan, but her book might make you stumble… »