Love, Leadership & Sacrifice: a lesson from my dad

He turned 77 the week the trip began.  He rode for 22 hours in a van (mostly in the back) that began to develop an aroma all its own. He spent a week in a cabin that had no running water but allowed plenty of outside air to come in.  He went to bed late and got up early.  Why?  Fly fishing in Yellowstone.

My two boys, my younger brother, my dad and I spent 6 days fishing in some of the worlds best trout streams and lakes.  We had a blast.  We fished.  We hiked in order to fish (usually uphill). We laughed and were silly.  We were with one another.  We were with God in some of his best handiwork.

But God had a leadership lesson for me

The trip was really my wife’s idea.  And when you have a spouse (25 years!) who tells you to take your dad and boys to Yellowstone fishing, you are truly blessed!  But it was my gig to plan and make all the arrangements for.  My dad and brother were going with, but I was in charge of making it happen.

Our first full day of fishing was on Wednesday and my dad did something that surprised me.  When we got out of the van at Black Deer Creek, he didn’t gear up.  He had a brand new Sage Rod calling out to the trout in the stream.  I know, because I found it on ebay for him.  But he left it in the case – on the first day!

I’m not going to fish so I can help Michael… 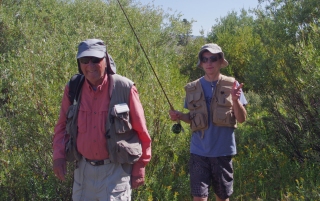 Grandpa and Michael make their way to the stream

We only had 5 1/2 days of fishing in Yellowstone.  My dad had been clear from the outset, “if I’m going, I’m going to fish. Not sightsee.”  Not only did my dad not fish on that first full day, but he spent two days not fishing.  He spend one day alongside Michael and he spent another alongside Andrew.

In love, he sacrificed & invested

My dad is one of my spiritual heroes.  He isn’t perfect; but, I hope I can grow and be the kind of man he is.  I have witnessed more transformation in his life than anyone else I know.

Without knowing it and quite unintentionally, my dad taught me a lesson on leadership in this trip.  I define love in this way, to will and act for the good of others; and that is what my dad did.  He loves my kids and willed that my sons would experience success fishing in Yellowstone. He gave up (sacrificed) his opportunities to fish in order to give them the time and space needed to get a feel for the art of fly fishing.

Me?  I fished.  Far from where they were, so the fishing would be good and undisturbed.  Just being real…  🙂

Jesus said that he came not to be served but to serve.  In the upper room he invited the disciples present to learn how to lead through an act of service.  That act of service was rooted in love.

It’s possible, however, to “serve” others as a way of manipulating people and environments in order to accomplish our agenda.  Paul reminds us in 1Cor 13 that serving in that way is just making noise.  I do that, I think, a lot.  I want to look like I love people and so I will serve them; but that is usually to get my own way.  I don’t think I am alone.

Lord, help me to love more and manipulate less.

This entry was posted on Thursday, August 29th, 2013 at 2:28 pm and posted in Uncategorized. You can follow any responses to this entry through the RSS 2.0 feed.
« Leadership Nesting
Jesus’ Deep Belief »